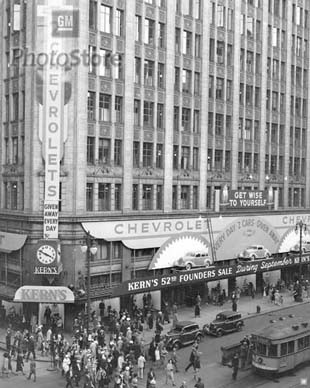 This is a 1935 image of three 1935 Chevrolet Master Deluxe models on the marquee of the Ernest Kern Department Store in downtown Detroit. Kern's Department Store, built in 1929, was one of several grand emporia which included the J. L. Hudson's and Crowley's department stores-contributing to a thriving commercial district. This site is now home to Compuware Corporation headquarters. Official GM Photograph from the General Motors Media Archives.