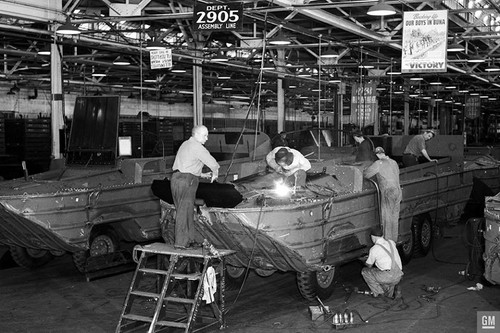 21,147 GMC DUKWs were built by GMC at Pontiac West Assembly and Chevrolet at St Louis Truck Assembly between 1942 and 1945. GMC and well known yacht designers Sparkman & Stephens collaborated on its' development. It was conceived, engineered and entered production in record time. This amphibious vehicle was based on a GMC CCKW military truck that was already in production. DUKWs have been used by military and civilian groups all over the world for decades. Britain's Royal Marines had several DUKWs in active service until 2012. An original DUKW is included in GM's Collection.