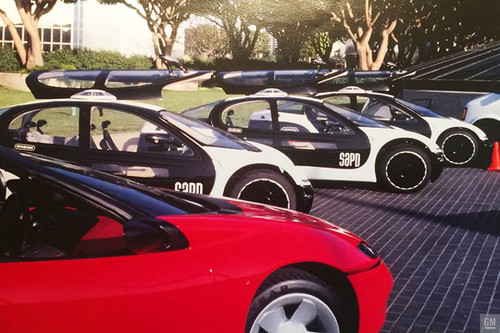 These SAPD patrol cars are ready for another days work on the set of the Warner Brothers / Silver Pictures film "Demolition Man" that was set in the mythical, future city of "San Angeles". Notice that these SAPD cars are actually clones of GM's "Ultralite" concept car. To create an authentic future world of transportation, Warner Brothers worked with GM to set up an assembly facility in Burbank that produced 22 Ultralite clones for the film. Many other GM concept vehicles were also used in "Demolition Man".