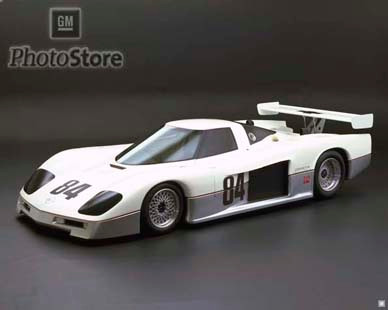 "A Corvette in name only, the Corvette GTP (Grand Touring Prototype) was one of the fastest and most exotic race cars ever to wear a red Bowtie. Based on an English Lola T600 chassis and powered by an all-American turbocharged Chevy V6, the mid-engined racer was a rocketship. At full boost, the Corvette GTP's 3.4-liter (209ci) V6 pumped out more than 1,000 horsepower. This amazing machine claimed seven poles in the IMSA Camel GT series in 1986 and won two races. In 1987, the Corvette GTP captured four more poles. The Corvette GTP became a test bed for even more exotic technology when it was outfitted with an active suspension system and carbon brakes. In the twilight years of the program, a naturally aspirated all-aluminum small-block V8 replaced the turbo V6."