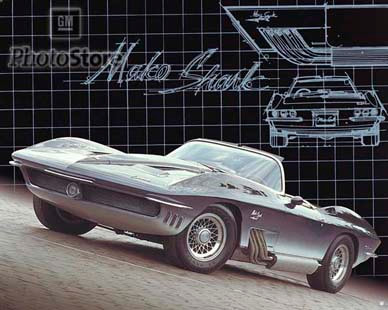 Official GM Photograph from the General Motors Media Archives. Later known as the ‘Mako Shark I,’ the Corvette Shark concept car was the brainchild of William (Bill) Mitchell. Legend surrounds the origin of the car, including Mitchell’s flash of inspiration after catching a shark while deep-sea fishing. The Shark looked like a real shark, with a mouth, gills and a shark-like paint scheme that gradated from blue/gray on the top to silver/white on the bottom (along the rocker panels). Memorable features included a sharp, menacing “nose” and four-into-two side pipes. The Shark, along with the Stingray Racer, heavily influenced the body design of the second generation of Corvette models.