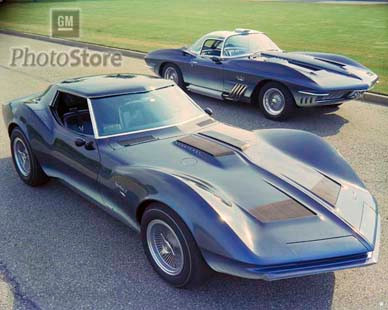 1963 Chevrolet Corvette Mako Shark I concept car (rear) and the 1965 Chevrolet Corvette Mako Shark II concept car (front). The Mako Shark II was originally built in 1965 under the direction of William (Bill) L. Mitchell, Vice President of GM Styling Staff, and set the design standard for the 1968-1982 production Corvette. This hand-built Corvette was a favorite of Mr. Mitchell’s and he drove it daily. Its paint scheme matched the original Mako Shark. In 1969, the car was returned to the GM Design studio for more changes. At that time, the name was changed to the Manta Ray.