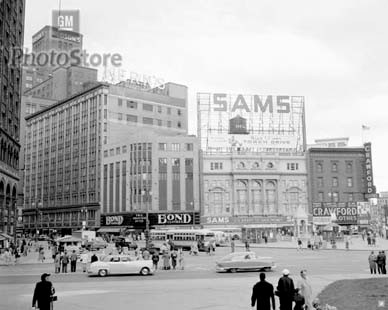 The present-day site of the new Compuware World Headquarters on Woodward Avenue was once the heart of a bustling shopping district, which included the J. L. Hudson and Ernest Kern department stores. Only one structure in this image remains in existence today, the Bagley Fountain. Its pyramidal capstone may be seen directly in front of Sam's. Detroit's first public drinking fountain, it was built in 1887. It was constructed with funds provided by the estate of Michigan Governor John Judson Bagley, who willed approximately $7,000 for this structure. The Romanesque-style fountain is the only surviving work in Michigan of famed architect Henry Hobson Richardson. Official GM Photograph from the General Motors Media Archives.