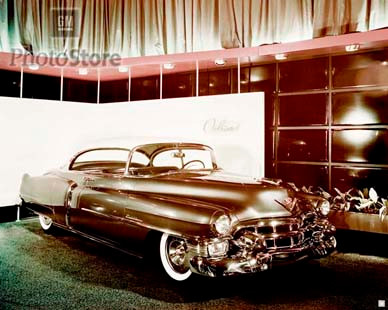 The 1953 Motorama showcar 'Orleans' was the first 4-door hardtop concept car. Hardtop sedan construction eliminated the traditional 'B' pillar, enabling a sleeker appearance. This styling innovation utilized frameless windows and was widely adopted throughout the industry. Buick and Oldsmobile introduced their production 4-door hardtops in 1955, but Cadillac waited until 1956 to introduce theirs. The showcar 'Orleans' , with center opening doors, is pictured here in the Basildon Room of the Waldorf-Astoria Hotel for the Motorama, January 17-23, 1953. Official GM Photograph from the General Motors Media Archives.