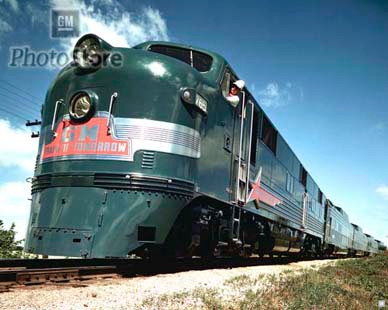 This experimental streamline passenger train was powered by a standard Electro-Motive Division 2,000 horsepower 'E-Series' diesel locomotive with two 12 cylinder, two cycle v-type diesel engines. The model was an E-7 built from 1945 to 1949. A total of 428 E-7s were built by Electro-Motive Division. For 2 1/2 years this famous blue and silver train toured the United States and Canada capturing the public's imagination as well as making important contributions to the railroad industry. Official GM Photograph from the General Motors Media Archives.