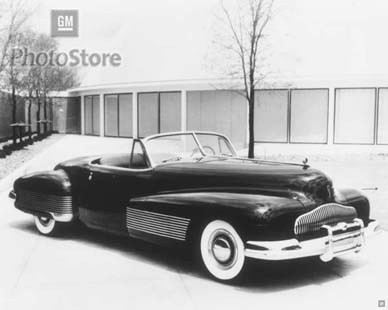 GM's first concept car, the 1938 Buick Y-Job 2-passenger sports convertible developed by Harley Earl, featured disappearing headlamps, a convertible top that automatically conceals itself beneath a metal cover, and many advanced styling features. Its design influenced Buick models for many years after its 1938 introduction. In the background is the Design Dome at the GM Warren Technical Center. The Design Dome’s 188-foot diameter floor can be set up as an auditorium for an audience of more than 1000, or used as an exhibition hall. The outer dome is 65 feet high with a span of 188 feet, and is based on pressure-vessel construction. The aluminum shell is 3/8 of an inch thick-thinner than what an eggshell is to an egg. Official GM Photograph from the General Motors Media Archives.