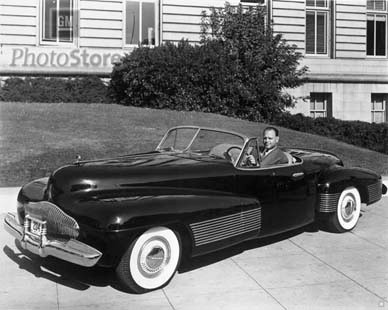 The Buick Y-Job is generally considered the industry's first concept car. Created by General Motors Styling and Buick Engineering, it was designed by Harley J. Earl (seated), GM's first design chief, and built on a production Buick chassis modified by Charlie Chayne, then Buick's chief engineer. Buick called it ‘Y’ because so many makers dubbed experimental cars ‘X’. Styling and mechanical features of the ‘Y-Job’ showed up on GM products, particularly Buick and Cadillac, throughout the 1940s. Official GM Photograph from the General Motors Media Archives.