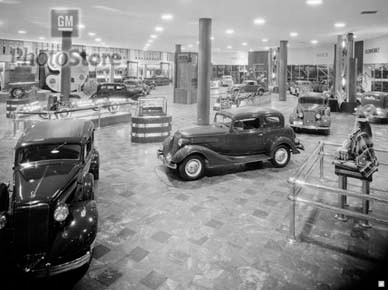 1934 Pontiac Series 603 4-door sedan (left) 1934 Pontiac Series 603 2-door touring sedan (center front) 1934 Oldsmobile L-Series 4-door sedan (right) at 1933-1934 Chicago World's Fair which was the site of a great international centennial exposition. The central theme was 'the dramatization of the progress of civilization during the hundred years of Chicago's existence.' Appropriately named the Century of Progress International Exposition, it focused on the great scientific, technological and engineering developments of the century. Building developments such as prefabricated materials, uniform lighting and air conditioning were utilized at the exposition. Official GM Photograph from the General Motors Media Archives.